Friends, in this post we will talk about Paras Kalnawat Biography, Real Name, Date of Birth, Age, Height, Parents, Profession, Qualification, Girlfriend, Income, and Net Worth.

Paras Kalnavat is an Indian famous Actor, Model, and Social Media Influencer. He started his career in 2017 with the role of ‘Sanjay Prince’ in the TV show “Meri Durga”. And from this, he also started getting love from people.

After this he did many famous shows like “Mariam Khan, Aye Zindagi, Kaun Hai, Laal Ishq, Anupamaa”. He started his OTT career in his first web series in 2019 with “Dil Hi Toh Hai Season 2”.

Along with this, he also got a chance to work in music videos his most popular music video name is “Akhaa Vich” and it is sung by Sonu Kakkar. And so far this music video has been seen by around 5 million people on Youtube.

If you want to see it too. So you can see below. And along with this, they also have a good following on social media.

Who is Paras Kalnawat

Paras Kalnavat is a famous Actor, Model, and Social Media Influencer of India. He is a resident of Bhandara, Maharashtra, India. His real name is ‘Paras Bhushan Kalnawat’. And his Nick Name is ‘Paru’. His Zodiac sign is ‘Scorpio’.

How old is Paras Kalnawat? Paras was born on 9 November 1996 in Bhandara, Maharashtra, India. The age of Paras is around 26 years in 2022.

The height of Paras is 6.2 feet & inches and the weight is around 70 kg. Her Eye Color is Hazel Gray and her Hair Color is also Black.

Paras Kalnawat did his schooling from Nagpur. And completed his college studies at SK Somaiya College of Arts, Science and Commerce, Mumbai. He completed his graduation in B.Com.

Paras father’s name is Bhushan Kalnawat and he is a businessman by profession. And his mother’s name is Anita Kalnawat, she is a Home Maker.

He also has a sister. About which we do not have much information. We will update here as soon as we get any information.

Paras is not married yet. And on social media, Urfi Javed (Actress) is being told as his Rumored Girlfriend. But we have not been given any information from their side. If there is any update we will update here.

Paras is an Actor, Model, Dancer, and Social Media Influencer by profession. He has about 1.5 million followers on Instagram.

There are about 4 lakh followers on their Facebook page. He also has a Youtube channel on which he sometimes uploads videos. Subscribers of his channel are not public.

Paras Kalnavat started his Youtube channel in 2020. And uploaded the first video on my channel on 29 September 2020. The title of his first video is “Cheen lunga ya khuda se maang laaunga (Paras Kalnawat)”. In the beginning, his videos used to get very few views.

These videos also upload very little. Subscribers of his channel are not public. So there is no information about it. If you want to see the most popular videos on his channel, then you can watch them below. More than 7 lakh people have seen this video on Youtube so far.

Friends, if you want to know the income of Paras Kalnavat. So by the way, we don’t have much information. But according to some websites, their monthly income is around 70-90 thousand.

The main income source of Paras Kalnavat comes from Acting, Modeling, and Social Media Promotion. According to some websites, his net worth is being told around $ 3 million.

But there has been no such disclosure from Paras Kalnawat. If any information is given from their side. So we will update here.

If you want to talk to Paras Kalnavat, then you can msg him on Instagram. And you can also email them. And they have not made their contact number public yet.

He has also received many awards for his acting and modeling. He has been given the award of “Digital Debut of the Year” for his web series “Dil Hi Toh Hai”.

Apart from this, he has got many awards, which we will update here as soon as we get any information.

Paras was born on 9 November 1996 in Bhandara, Maharashtra, India.

Paras is an Actor, Model, and Social Media Influencer by profession. 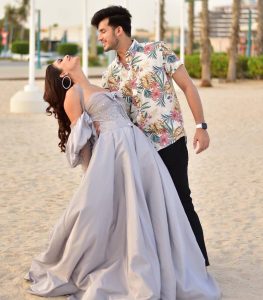